CHUCK NICE - - CHRISTINE HURLEY - - RAY ELLIN
BACK TO ALL EVENTS 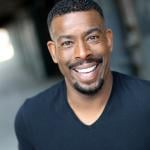