FROM CBS' "LATE SHOW" BRIAN MCFADDEN... FROM "SEINFELD" AND "CONAN" TONY V... FROM COMEDY CENTRAL'S "THIS WEEK AT THE COMEDY CELLAR" ARUBA RAY ELLIN
BACK TO ALL EVENTS 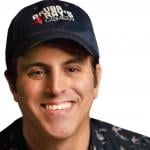